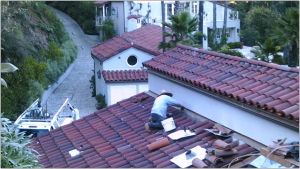 After a large storm passes through the area, a homeowner might be concerned about the shape of their roof. It’s always a good idea to contact a professional for an inspection if they’re worried, but there are three signs they definitely won’t want to ignore after a storm passes. Take the time to learn the signs so you can know when to call a roofing company in Los Angeles after a storm.

Although not every storm calls for a roofer near Los Angeles CA to perform an inspection, knowing the signs of roofing damage and when to call a roofer is essential. Every homeowner should remember that an inspection from a roofing specialist in Los Angeles CA is far less expensive compared to a major repair or a full replacement. It’s always a good idea to have an inspection done if there’s any worry the roof could be damaged instead of holding off until major damage is noticed on the roof and inside the home.

Contact us for a free comprehensive written estimate for your next roofing project.